Name-calling in the Wilderness

Horridus! Horridus!: Name-calling in the Wilderness is a performance investigating the ways in which language has been used throughout history to tame the wildness of the world—or at least to produce such an illusion. For though we know the act of naming enables organization for systematic study, and the transmission of a wealth of knowledge to successive generations through “The Book of Nature”, we also know that words can be deceiving. Is language our gentle servant, our guide to unlocking Nature’s secrets, or might it not be capable also of slowly lulling us to sleep? How much of the world do we know only through hearsay?

Such are the questions probed by Professor Adam Wallker Schell, an erudite and irritable, thoroughly modern mind, young before his time, wrapped in the trappings of days gone by, part scientist, part snake-oil salesman, and the latest emanation of writer-performer Brett Keyser’s elastic alter ego. 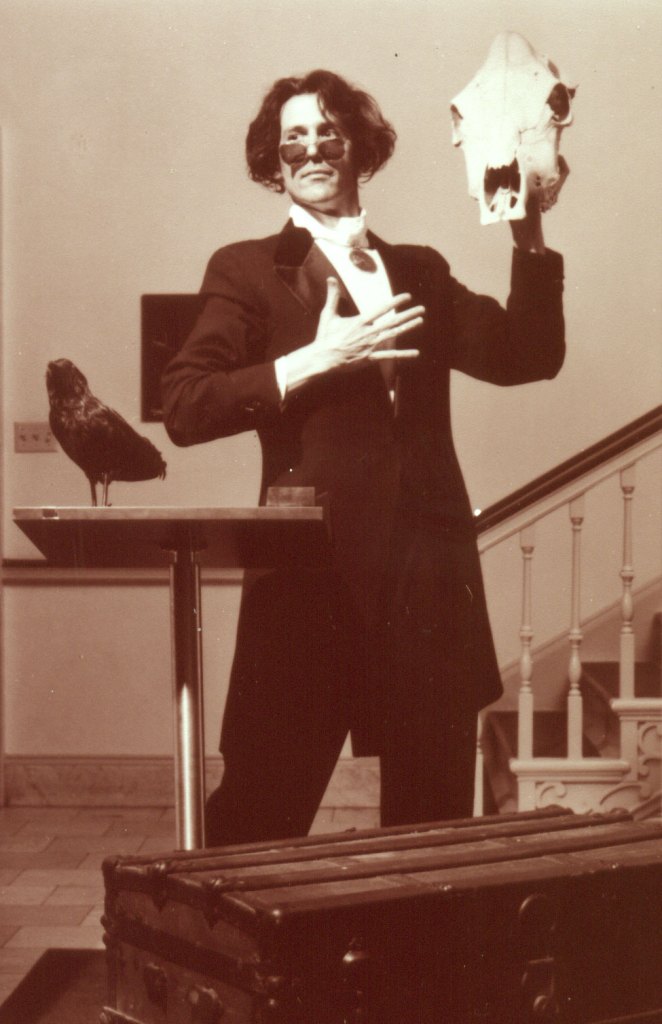 The humorous mock-lecture format of Horridus! Horridus! illuminates themes running through the natural history exhibit where its stage is set at Philosophical Hall (the most elusive of addresses on Independence Mall) which is home to the storied ‘American Philosophical Society Held at Philadelphia for Promoting Useful Knowledge’. From the long list of exhibit contributors (many past APS members) whose works and whose spirits fill the historic hall, Mr. Keyser has called on a number of bright stars to help breathe life into the “polygenesis” of Professor Schell. Present may be found the exhuberant qualities of Charles Willson Peale and Thomas Jefferson, mixed with the more sensitive natures of William Bartram and John Heckewelder. Not a historical character, but a modern evocation of history through a distillation of characters, Professor Schell is a living “specimen” of the types of personalities who helped shape our inherited knowledge of the natural world. As such, he is equipped to guide us not only through the charted course of Natural History, but to point toward possible routes to an as yet unexplored “Natural Future”.

Horridus! Horridus! was commissioned by Dr. Sue Ann Prince, Director of the APS Museum, where it was performed through the Fall of 2003 and Spring 2004 in conjunction with the exhibition, Stuffing Birds, Pressing Plants, Shaping Knowledge: Natural History in North America, 1730–1860.

“Either I stole your notes, or you stole mine!”

The esteemed evolutionary biologist Edward O. Wilson confided, after watching a special engagement of Horridus! Horridus! following his own presentation, The Linnaean Enterprise: Past, Present, and Future, at the American Philosophical Society’s annual members’ meeting.